For President’s Day weekend, Matthew and I both figured it was time for a new adventure.

After looking for cheap flights around the U.S. using Google Flights (simply search ‘everywhere’ on Google Flights, click on the map, pick your dates, and check out all the flights and their prices around the U.S.!), we chose Los Angeles (since neither of us had been) for a great deal of $72 round-trip via Spirit Airlines, from Saturday, February 18 to Tuesday, February 21.

After booking our flights, 2 weeks out from our trip date, we went ahead and booked 2 places on Airbnb for our stay. Our first night would be spent at a dive (about $40) near the University of Southern California, just about 5 minutes from downtown LA, and Sunday and Monday night would be spent on a small yacht in the world’s largest boat harbor, Marina Del Rey (for $90/night).

The next week – 1 week before our trip – we sat down at Einstein’s and planned our whole vacation (while enjoying our free bagels & coffee). Since we were flying into LA, rather than driving, and didn’t want to deal with the hassle of getting a rental car, we decided it would be easiest (and cheapest) to take the metro. While choosing our Airbnb locations, we purposely chose one close to downtown LA for our first night, because we had decided that we would spend Saturday night and the whole Sunday exploring LA before heading to the Marina. We would do all the touristy things and more ~ Visit LA Live, go to the Walt Disney Concert Hall, visit Union Station, walk through Chinatown, explore Grand Park, check out Koreatown, the Griffith Observatory, The Grove, the LA County Museum of Art, and whatever we found in between.

So, once we knew where we wanted to go, we mapped out which metro lines we would have to take and familiarized ourselves with the public transportation. On Sunday night, Monday, and Tuesday, we would be relaxing more on our boat and checking out the Marina Del Rey, Venice Beach, and Santa Monica, without having to use public transportation (just walking and riding the bikes provided at our Airbnb yacht). After planning our entire trip to a tee, we felt extremely prepared and were increasingly excited as President’s Day weekend drew nearer.

But, just as is possible with any vacation, not everything went as planned. There were certainly obstacles – some expected, some not so much.

The day  before our trip, it poured (and I mean flooded) in LA. So, rather than blue skies and sunny days, we braced ourselves for grayer skies and gloomier days. Also, in order to bring a free personal item on Spirit Airlines (16″ x 14″ x 12″), we had to pack extremely light, which I thought would be an issue for me (I tend to overpack..), but it surprisingly wasn’t that difficult at all. The bag I packed was even smaller than it had to be, as I knew I would have to be comfortable carrying it around all day Sunday, since we would be checking out of our Airbnb early that morning and walking everywhere around LA. So, the bag wasn’t too much of an issue. The issues truly began when we arrived in LA.

The flight was fine; actually, it was really pretty, as we flew from Denver and over the Rocky Mountains to get to California. When we landed at 5:00 PM, we maneuvered through the airport pretty easily, but struggled to find the right airport bus that would take us to the downtown bus station. Just by our luck, they had recently moved our bus from the downstairs stop to the upstairs stop, and had poorly marked this change, so most of the airport workers didn’t even realize it, and told us the wrong place to wait for the airport bus. When we finally found the bus and arrived at the next bus station, we asked a security guard to kindly point us in the direction of our next bus. It only cost $1.75 each for us to take the bus all the way from the airport to the University of Southern California – the next day, we planned to buy a day pass ($7.00 + $1 to pay for the actual card – for 24 hours on any downtown bus and rail – which a sweet lady informed us that you can only buy at the rail stations), since we would be riding the metro all day on Sunday.

On our way downtown, our next obstacle arose. We texted our Airbnb host to let him know we would be there shortly, and received an unexpected reply – apparently, there was a squatter in his house, so we would not be able to stay there that night. Great.
Well, we certainly did not want to be homeless in LA, so when we arrived at the University of Southern California, we spent the next 3 hours calling Airbnb, getting our refunds, and trying to find a place to stay. After much frustration and coldness (it was pretty chilly in LA after dark..), we finally found an Airbnb that would take us in at such short notice, so late at night.

The Airbnb we found was pretty much a dive in Koreatown, but we got our own room and it was in what seemed to be a safe neighborhood. Overall, I was just happy to have a place to stay for the night. We took an Uber from USC to our Airbnb and the moment we arrived, we checked in and went out for food (it was like 11:00 PM and we were starving). It may have been ignorance or sheer lack of knowledge, but I had no idea that Koreatown would be just that – Koreatown. We were the only non-Korean people who strolled into the extremely crowded restaurant, Ddong Ggo Pocha, and as a result, we were also the only people who didn’t know that the only way to get service was to ring the bell under the table (a bell we didn’t know even existed..). Luckily, a waiter filled us in on the ‘obvious,’ and we were able to order one of the most delicious meals I’ve had in a while. Whether it was so delicious simply because we were starving, or because it truly was that good, I don’t care. All I know is that the butter chicken and ramen we scarfed down was so incredibly tasty. 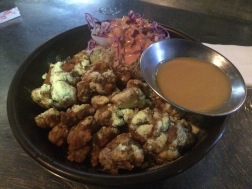 Needless to say, after a filling dinner, we slept extremely well (happy to have a bed to lay our heads on) in our Airbnb that night.

The next day, we were ready for things to go right. Although we had everything planned from our original Airbnb location near USC, we made slight alterations, and started the day in Koreatown instead. Unfortunately, it rained on us a bit, and it was pretty much cloudy all day long, but we did end up doing almost everything we wanted to, and very easily with our $8 metro day pass. From Koreatown to Union Station to Chinatown to downtown LA with LA Live, the LA Times and the District Market to the Griffith Observatory (which we got to via a weekend shuttle to the Observatory) where we saw LA from afar and the Hollywood sign, and finally to the famous Pink’s Hot Dogs – we had a full day and really felt that we saw much of what LA had to offer.

After the non-stop day exploring downtown, we were happy to finally get on the bus that would take us to Marina Del Rey.

At 6:00, we met up with our host at our Airbnb boat. It was small, well displayed, and well done in the fact that we would only be staying there 2 nights. Our host had some snacks, karaoke, movies, a kayak, towels & toiletries, and bikes (which proved to be the most important part) ready for us when we arrived. Despite my concerns of constant movement from the water below us, we slept really well in that boat and were well rested for the next day.

On Monday morning, we went to a tasty breakfast place right on the marina – Killer Cafe (where we got the ‘secret’ deal between 6:30 am and 8:30 am, thanks to our Airbnb host’s insight) – and took the bikes to Venice Beach, where we rode along the boardwalk for forever. We checked out the Santa Monica Pier, enjoyed a delicious fried chicken and waffle sandwich at Bruxie in downtown Santa Monica, and warmed up from the chilly ride at a cute coffee shop, The Cow’s End Cafe, in Venice on our way back to the Marina. When we got back to our boat, we drank some of the wine and beer we had gotten from the grocery store the night before, busted out some karaoke, and headed out for dinner. We purposely went to the Killer Shrimp for their Killer Shrimp deal, but since it was President’s Day, they weren’t running the deal (good to keep in mind for next time), which was unfortunate, but we stayed and ordered something else instead.

Our last day was full of more exploring via bike – this time, all around the opposite end of Venice Beach – and tried to search for seals, which were impossible to find, and apparently a little farther south. For lunch, we rode our bikes to try In-N-Out for the first time – animal style and all – and despite the fact that I rarely eat fast food, it was pretty delicious. After checking out of our Airbnb around 2:00 PM, we spent the rest of our time on Venice Beach, walking around, exploring everything we had missed before. When it was time to go, we easily found a bus that took us right from Venice to the airport to catch our flight around 9:00 pm. Oh, and we somehow managed to get first-class seats (which basically just meant more room..no free food/drinks, unfortunately), but hey, I guess some things do work out. The night ended with a mad dash from the plane to the final lightrail leaving the airport at 12:25 am, and then another mad dash from union station to the lightrail that took us home.

Our trip definitely had its ups and its downs, but overall, it was one of the most memorable trips we’ve had so far. Now, I just can’t wait to go back to Cali when the sun is shining and it’s warm enough to truly relax on the beach 🙂

4 days of fun in a whole new city with my best friend for just $266 each?
Sounds like a pretty sweet deal to me 🙂

Living the high life at a low price in Denver, Colorado

There was an error retrieving images from Instagram. An attempt will be remade in a few minutes.